Georgetown Remembers: The Fiftieth Anniversary of the Death of John Courtney Murray

On August 16, 1967, John Courtney Murray—Jesuit priest, theologian, and public intellectual—passed away less than a month before he would have turned 63. For the final three decades of his life, he taught at Woodstock College and edited the Jesuit journal Theological Studies. Celebrated on Time magazine’s cover (December 12, 1960) for contributions to American domestic and foreign policy debates and for sympathetic, if critical, understanding of religion in American public life, he later helped compose Vatican II’s “Declaration on Religious Liberty” (Dignitatis Humanae).


From Georgetown’s introductory Theology course, “The Problem of God”—named after Murray’s 1962 Yale Lectures—to the mission of the Berkley Center for Religion, Peace, and World Affairs, Murray’s influence can be seen throughout the university’s programming. This year, Georgetown celebrates John Courtney Murray’s legacy in the fiftieth anniversary year of his passing with a day-long event examining Ignatian practice and Catholic and Jesuit identity.


This event is co-sponsored by the Berkley Center for Religion, Peace, and World Affairs and the Office of the President. 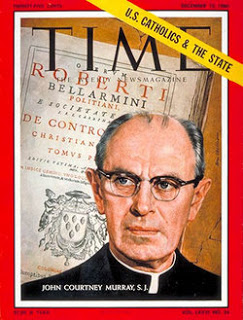